On our last day in the West Bank we were invited by Joseph’s friend Omar to go to the village in Hebron that we had been looking for the other day that had notable attacks by settlers. He suggested that we first stop by his home. 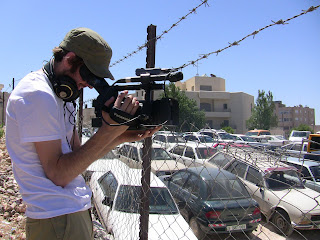 stood a looming portion of the wall and a small check point for Palestinians who work on the other side to walk though. Because of the check point he and his neighbors get a lot of traffic through there, but that the kind that's good for business.

Omar showed us all the businesses that used to be open up and down the street, describing the place as having been a fairly bustling neighborhood. Besides the painfully obvious fact that the wall jutting in through the little neighborhood didn’t really give off a lingering vibe, I asked why the businesses had closed down, since so many Palestinians march through there on their way to work ( 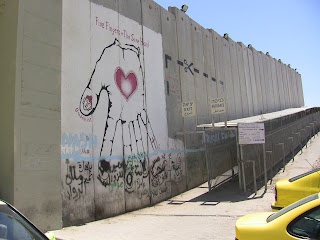 mostly very low income jobs on the other side). He explained to me that the visa’s for these Palestinians working in Israel had a daily time limit. That they have to use to get through the check point, go to work and get back across by 7pm, otherwise they violate the visa that allows them to travel to Jerusalem.

With guns and towers, visas and curfews, living next to a check point is, well, difficult.

Next we were off to At-Tuwani, an 1000-year-old village south of Hebron reportedly having major problems with 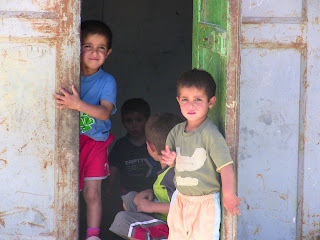 the nearby settlement : Basically an ongoing series gruesome attempts by nearby the Settlers to drive these people off their land, beginning around the time I was born.

We arrived and were greeted by extreme poverty, like many things here, conditions that beg the question, "why?".

We walked into the “village” a little ways and were welcomed by Sean with the Christian Peacemaker Team. This international team had been at first temporally and now permanently dispatched to support this village. (I urge everyone to read more about what they are up to) It was very very hot out so they offered us water and we all sat down to have a chat in the shade for a moment. 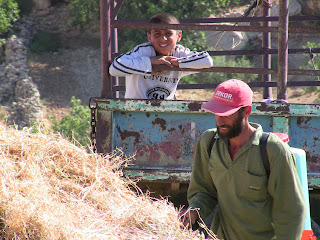 Sean explained to us that the village was made up of families that had been here for generations upon generations, that they were and still are farmers who work the land to sustain themselves. However since the Ma'on settlement arrived in the early 80s things went from good to worse for these people.

Like in Hebron, the Settlers here want these people out. That’s why the Peacemakers had been called in there. Apparently after a string of attacks on school children with rocks and as well as consistent attacks on the shepherds, as well as some of the villagers being shot by settlers from trees, this village and the others in the region who were under attack finally got organized, and asked this non-profit group to work with them, for the most part as international escorts.

NOTE: Settlers were issued (and still carry) Uzi and M-16 machine guns for "self-defense." They also are (defending the land that even the Israeli government officially deemed Palestinian, yet encouraged to defend it with these weapons and their own escorts (like body guards paid for by the Israeli government, hows that for taxation without representation?)

I asked Sean a little about what life was like for these people and he explained that these people are living with out running water or electricity, which they have been trying to get from the Israeli government who has denied these request violating The Universal Declaration of Human Rights as determined by the UN, drafted, ironically as a reaction to the atrocities perpetrated by the Nazi's during WWII.

The Israeli Government’s excuse for denying these people access to water and power? That the people didn't want it. Which, as Sean put it “is absurd", especially since there have been repeated well poisonings, by, you guessed it the neighboring settlers, who not only have their water pumping in but had their entire town subs 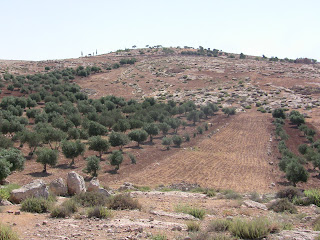 We walked out far into the land to see the shepherds at work. The landscape was stunning. Along the way Sean showed us where another town had been run out by the violence against them. We saw the shepherds who were mostly herding goats along in the valley and up higher on the mountain. I couldn’t help but ask, what were the goats grazing on? As it turns out, not much. There hasn’t been enough rain, which combined with the loss of farming land that has been poisoned by the settlers it has been hard for these simple villagers to maintain their long tradition of peacefully working the land.

So what are the villagers doing to survive? Well, they are applying for permits to be allowed to work low paying jobs the Israeli side of town. Check mate.

This is the last entry of this blog from oversees but I would like to say right now, that it feels to us that this journey is just beginning. On this trip the world of the conflict was opened up for me to see, and we began to understand in a way that I have struggled to show here though text and pictures alone. Even so, I hope that this blog has helped you to begin to ask questions about this conflict and that the the film itself will be able to show you what we have seen in a way words and pictures cannot.

One question I asked nearly everyone it met, both on camera and off, was are things getting better, or are they getting worse? Everyone had a different answer. I guess it depends on how you define progress. Or perhaps which of your freedoms you personally value most, whether your concern is for violence and curfew on the streets or the economic strangle hold over your country.

But there is no doubt in my mind that the settlements in the west bank are unjustifiable and that if their actions are allowed to continue (whether we admit that they are supported by the Israeli government in action or inaction) that the entire international community is to blame for not doing something to stop it.

On returning home, I became anxious over how to voice my opinion on the conflict after having seen it first hand and the feeling I have left with for the absolute need for an end to the oppression of the West Bank.

Luckily, as we sat waiting for our plane in Amman, we were welcomed home by a new voice of hope, with a well timed statement from President Obama. Following meetings at the White House with Palestinian Authority President Mahmoud Abbas, Obama released a statement saying that he has made clear that in talks with Netanyahu last week that "I was very clear...about the need to stop settlements, to make sure we are stopping the building of outposts."

Video of Obama on the advancement of peace and security in the Middle East, calling for a two state solution.

So we will continue to blog about the signs of hope for this region as well as out progress on the film as we work to support justice in "what many observers believe is a pivotal time in the Middle East peace process."

I hope that all of you who have followed this blog so far have found it enlightening, and that our journey into the conflict has intrigued you to continue to seek the truth about this conflict, in part I hope by supporting our completion of this film, because seeing is believing.

To support Corner Store please join our mailing list (or join us on Facebook) and consider a small donation to this project through Pay Pal of through the San Francisco Film Society. (or by check) 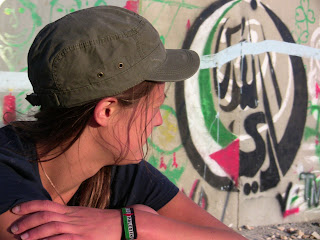 Posted by Katherine at 1:02 PM