We arrived at Joseph's home yesterday afternoon and we’re amazed by the view. His home, which is on a hill

(the whole area is very mountainous), overlooks a large portion of Bethlehem. We can see from there much of the new construction of the area, which includes some of the rebuilding of Palestine especially after the First Intifada in 1987 and the acts of retaliation which was destructive to the area physically and destroyed the area economically. Much of this rebuilding is being done by the Palestinian National Authority with monetary help from countries in Europe as well as places like Dubai. 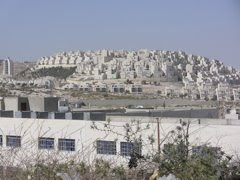 Off a little further in the distance, but not that much, we can see the new Settlement. Not to be crude about it looks a little like a blatant Imperial structure out out of a George Lucas film. It's amazing that you can see the land war going on here in Bethlehem in looking at this hillside. A land war where one side is, well, better financed.

Last night we spent some quality time with the family and the extended family. Although it is common for friends and family to stop by the home for meals, or just anytime, this was somewhat of a special night, on Joseph’s return. The kids Elias, Haneen and Ala are all very warm and have made us feel very included, and everyone is warming up to the camera as well. It is heartwarming to see Joseph with his kids and his life is taking on new meaning for us each day.

If fact, we are on content overload. There is so much here that looks, sounds and feels so different, and every question that we ask is met with a somewhat complicated answer. Things here are not straightforward for a people being pulled and pushed by so many forces, and for so many years. The people are just trying to live their life as best they can. They build despite the fact they don't know how long it will be before what they have worked for is upset again by the conflicts of the larger powers and their interests.
Posted by Katherine at 10:48 AM